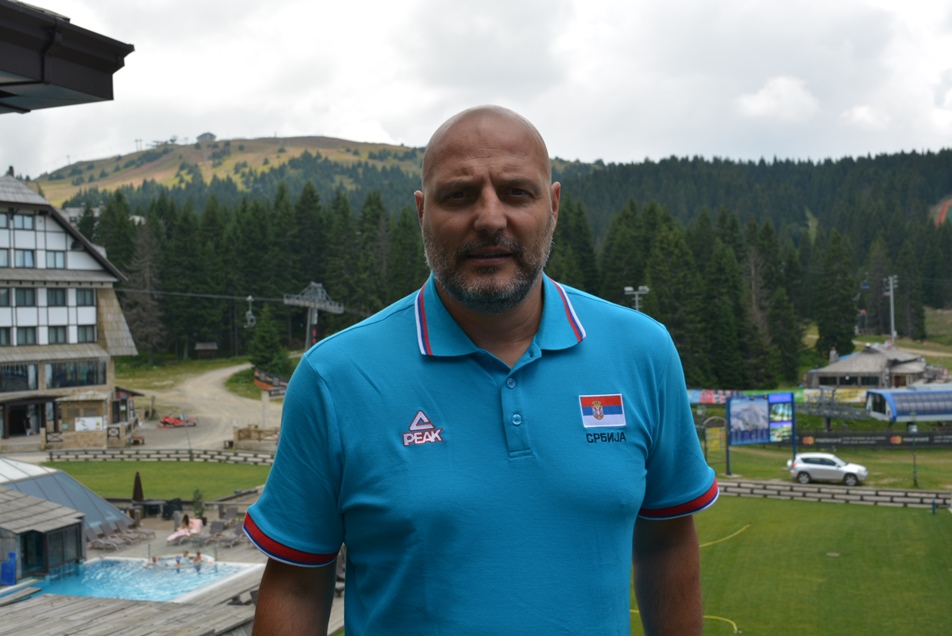 The senior basketball team of Serbia, (Serbian Eagles), are finalizing the basics of preparation for the 2019 Mundobasket on Kopaonik, at the MK Mountain Resort Kopaonik facilities, which ends on August 4, and on that occasion the Basketball Federation of Serbia organized a “Media Day” on the terrace of the Grand Hotel. 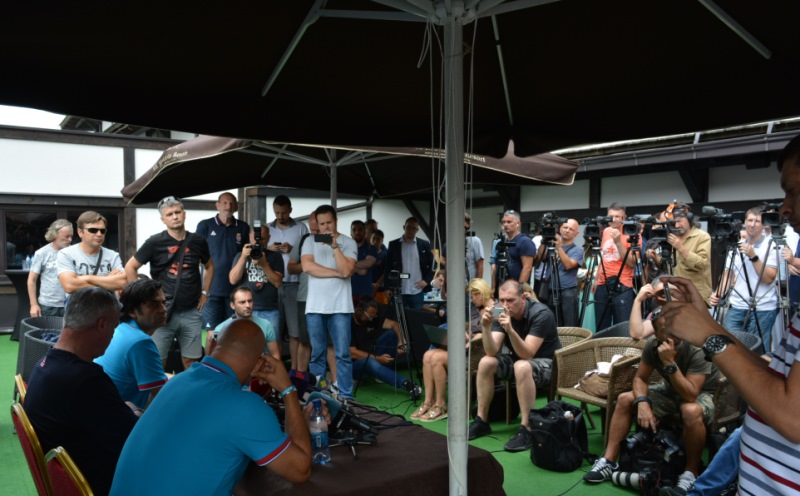 More than 60 journalists, cameramens and photojournalists visited senior basketball team of Serbia, which is traditionally preparing for the big competitions on Kopaonik thanks to MK Group. 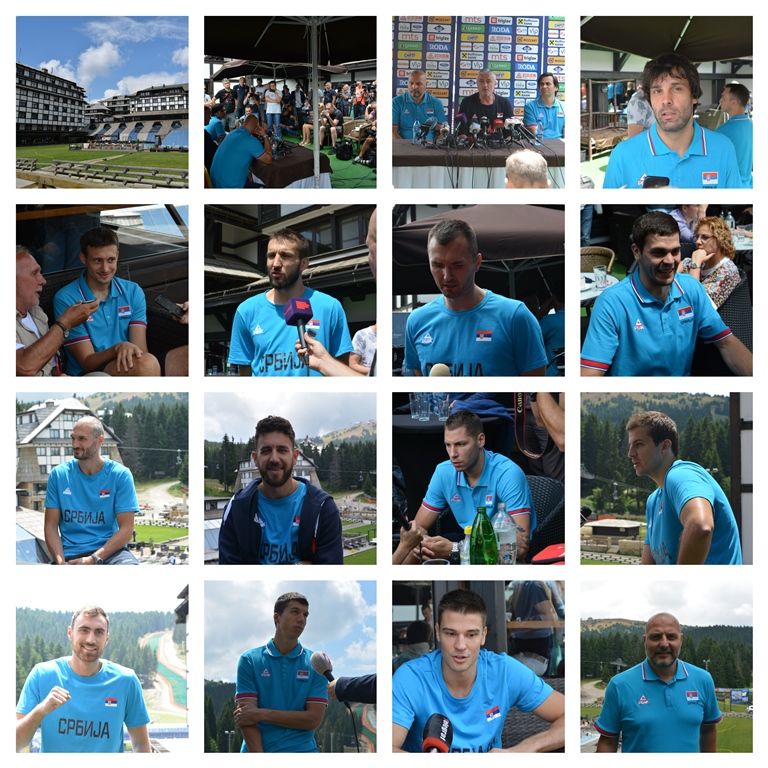 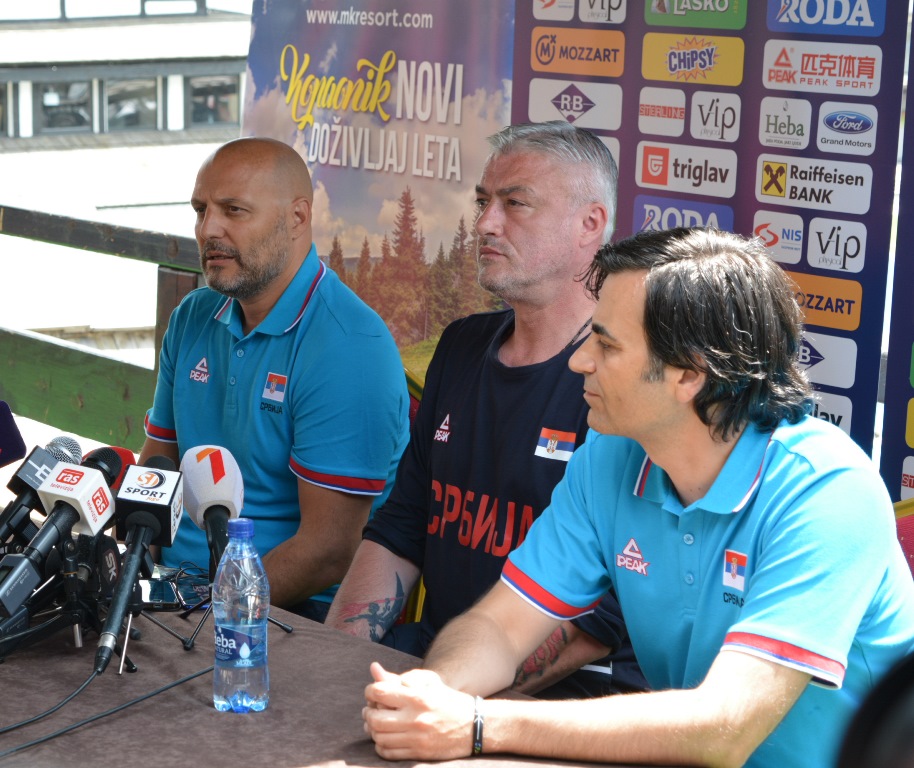 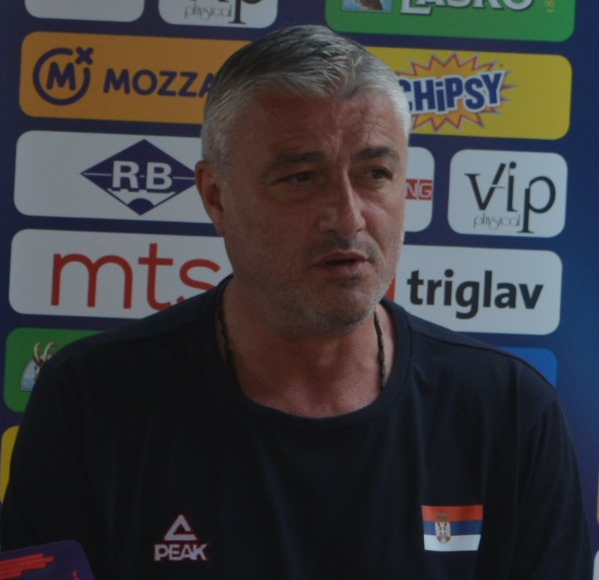 “Thank you for coming in such impressive numbers, though it doesn’t surprise me so much, because this is a promising team. I’m pretty sure the team at this hotel and on this mountain has everything it needs to prepare well. Thanks to Mr. Miodrag Kostic and The MK group on big support and for making us feel at home here. The players have worked phenomenally so far, but I would not interfere with the job of the coach, he will tell you better… ” Danilovic gave the opening statement.

Selector Aleksandar Djordjevic said he was pleased with the first part of the preparations, which lasted until Sunday, August 4, and he did not have a complete team due to NBA rules. 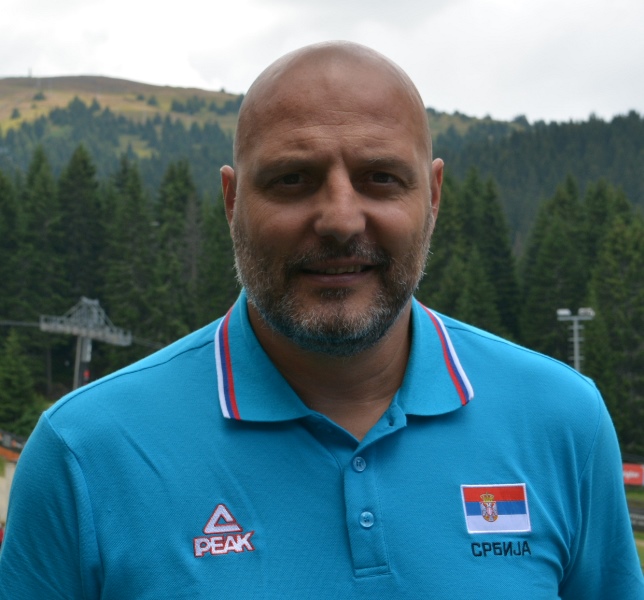 “Thank you all for coming in such a number. We are glad you are following us and that the interest is this big. These guys and players deserve all of this. We have a system and routine that we follow, we know what has brought us results so far and we will continue to do so. KSS has provided us with fantastic conditions for preparation, to get to the desired form and, as always, to attack one of the medals. This time one of two medals, because the third one is reserved, we al know for which national team, no matter what composition it came to World Cup. Trainings went well, no injuries, all the players that are here today physically responded brilliantly to the complexity of the preparations and that is a good sign. Already today, and in the coming days, other players who have been prevented so far from from comming because of their contracting with NBA teams will join us. The fight is yet to come to go to the strong competition that awaits us in the right shape.”

Selector Djordjevic talked about the favorites for medals in China, which is how much the chances of a gold medal are higher due to numerous cancellations of the biggest NBA stars in the USA selection. 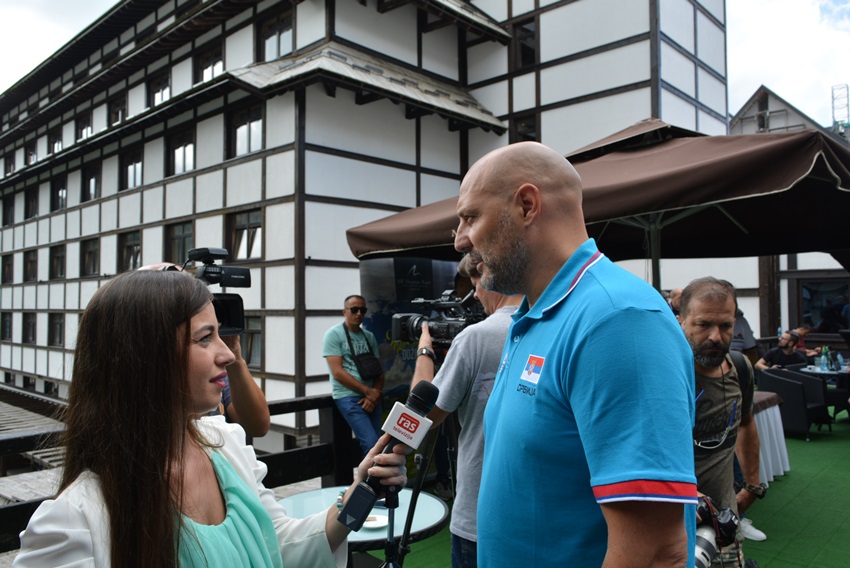 “All candidates have bigger chanches for the medal because of it… Many representations are going for the medal and everyone sees their chance, not just us, knowing that Americans have been defeated by Argentina, Yugoslavia, Spain, Greece in recent history… All of them are rightly looking for some promile chances to do it again. However, I think a lot more about other opponents such as Lithuania, Russia, Greece with the MVP player of the NBA league Antetokounmpo, which had a 5-0 mark in the last World Cup. Not to forget France, Spain , Italy, Canada, Argentina, and Australia, which never misses the opportunity to enter the World Cup and the Olympic Games in the strongest lineup… “

Djordjevic also accentuated that all invited players will get a chance.

“They have a chance for them every day, that begin from the day they are invited to the broader list. Everyone will be given an adequate chance, depending on what they have provided on the field. That is the goal, to crystallize the game that will embellish us at the World Cup, but also to pay attention to the future, to set the base for future competitions. “

The Head of the Expert Staff of our national team expressed his satisfaction with the work of Milan Mačvan and Dejan Todorović, who are here to get in good condition after serious injuries before the start of club preparations for the new season.

“I’m sorry that Ognjen Kuzmić couldn’t do it, we all know why. Big greetings to our Kuz, who after the injury did not have many minutes last season in Real…“

About the high expectations of the public and the great pressure due to the imperative of success, Djordjevic says:

“I think we have been through a lot in our lives and nobody can burden us more than ourselves. The pressure of the public means to us, because as soon as the pressure is there that means we are good and worthy of attention. I know everyone expects us to come back with a medal, and I guarantee you that we are getting ready with a hundred percent strength and effort. Whether we will bring a medal or not we do not know, but the pressure does not bother us, it is proof that we are worth it … “

When asked by a reporter when he would shorten the list, the selector answered:

“We know that we will lead 14 players to the final preparations in China, so the final lineup will be known before the World Cup starts – said Djordjevic.

For the sixth consecutive year, the Hotel Grand hosts our basketball team in the preparation for the World Basketball Championships, which takes place from August 31 to September 15 in China. 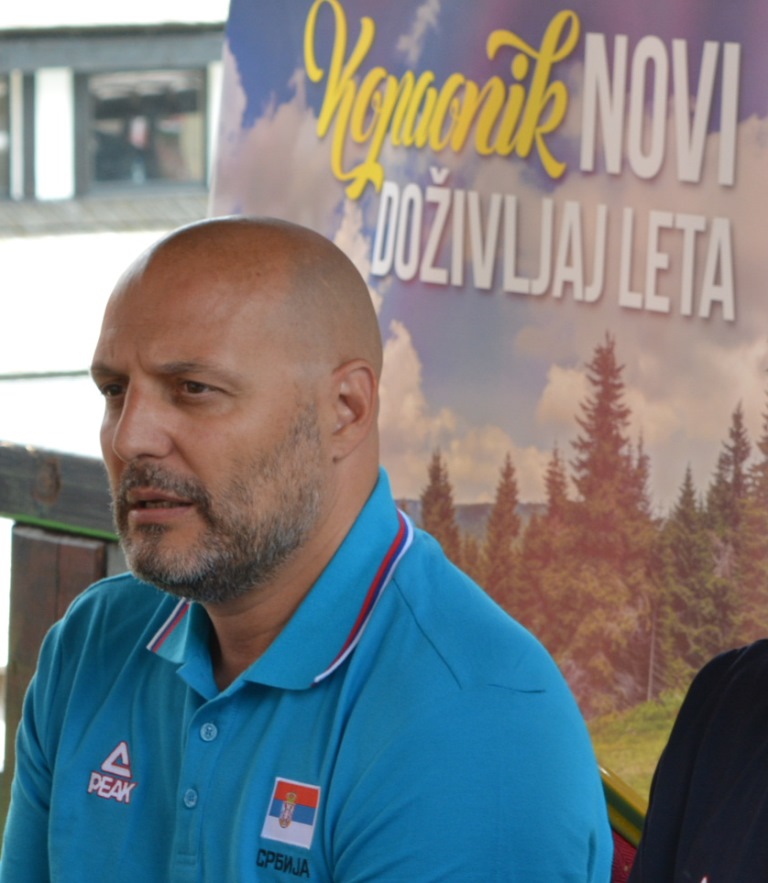 Selector Aleksandar Djordjevic spoke about the details of preparations at Kopaonik for the biggest basketball competition in the world, thanking MK Group and the Grand Hotel, which are their traditional hosts.

„I would like to take this opportunity to thank the MK Group and the entire staff of the Grand Hotel, who made their hospitality feel like at home. There are few places that offer our athletes outstanding opportunities to prepare for the world’s most important competitions, ” said Predrag Danilovic, president of the KSS. 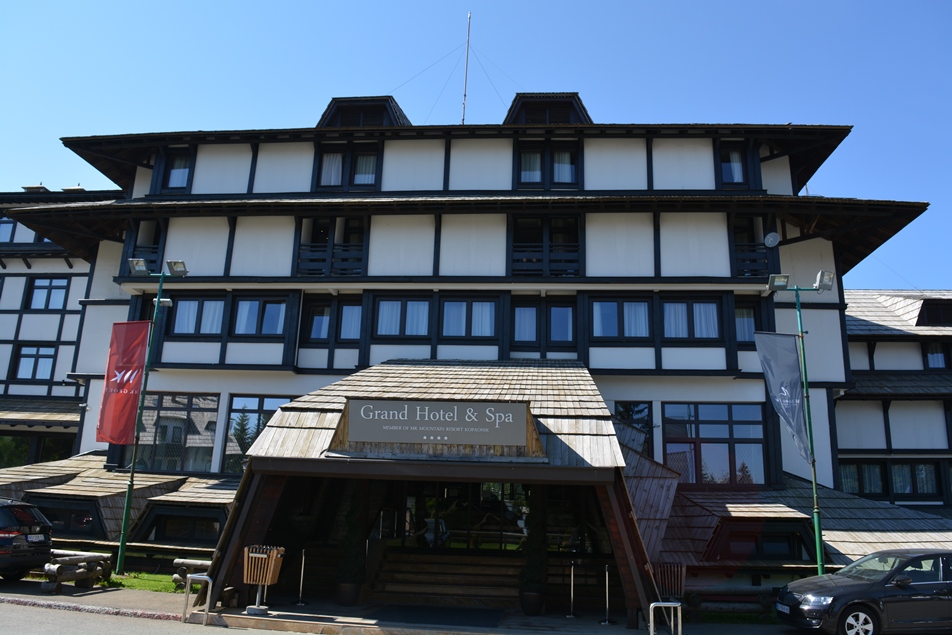 During the two-week stay at Kopaonik, the basketball team was provided with exceptional conditions for the Grand Hotel, which included: top-class accommodation, indoor basketball courts, fitness center, spa & wellness center facilities, as well as indoor and outdoor pools. 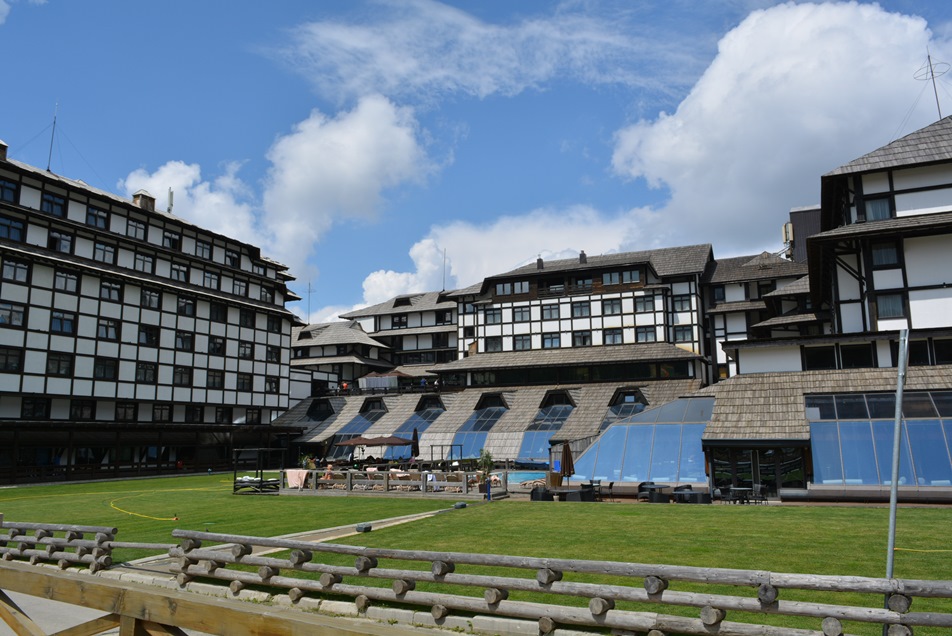 MK Group and its members, including MK Mountain Resort, continuously support the development of sports in Serbia, as part of the company’s socially responsible strategy, which, by way of example, helps the communities in which it operates in various ways and donations. 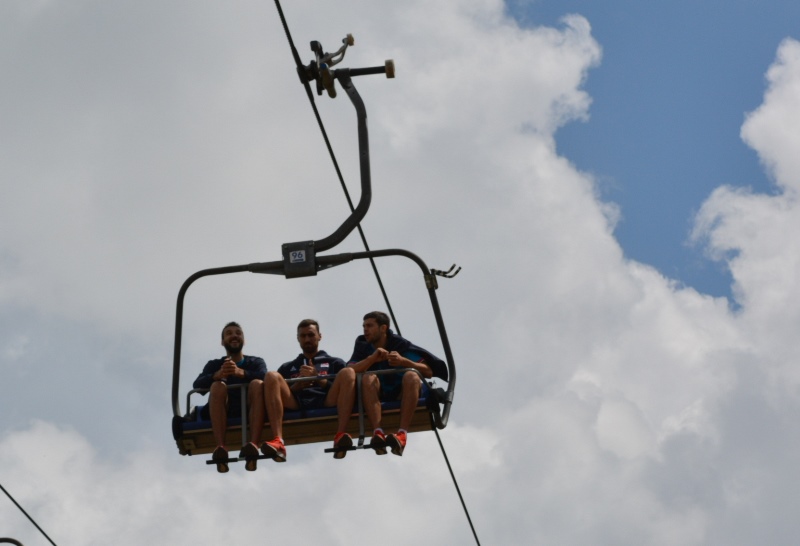 From Kopaonik, the national team will go to Čačak, where they will play a match against the local team Borac on August 4th. The next check is on August 7 in Zrenjanin against Finland. Three days later, Lithuania arrives at Belgrade’s Stark Arena , with which our basketball players will allso play their game in Kaunas on August 12. The new challenge will be the “Acropolis Cup” in Athens, where Serbia will play against Greece, Italy and Turkey from August 16-18.

The Serbian “Eagles” will travel to China on August 20, where they will have their last three World Cup checks, as they will play against Italy, than two days later against New Zeland and, finally, August 27 against France in the city of Shenyang .
Selected players from Aleksandar Djordjevic will thravel from Shenyang  to Foshan, where they will open the World Cup in China on August 31 (9:30 CET) with the Group D match against Angola 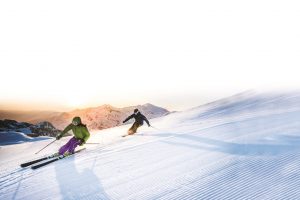 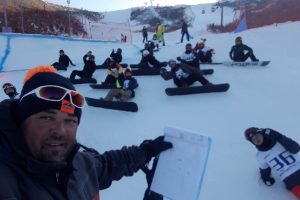